It’s Monday and I’m exhausted after a busy but very fun weekend!

On Friday I had a Zoo Lates Date, which I’ve been dying to go to for ages. I’ve visited London Zoo once before and felt a bit like I was wading through sticky, screechy children so the thought of an adults only lock-in definitely appealed.

My verdict is that anywhere you can walk around with a pint of gin & tonic watching tiger cubs play-fighting gets a thumbs up from me! The animals were so much more active later in the day – think turtles humping, crocodiles glaring, donkeys biting each other (cue Suarez jokes from the men), monkeys swinging, lions prowling, penguins splashing and to top it off we watched a snake devour an entire live mouse. It was disgustingly fascinating and I couldn’t stop watching it.

I got so caught up in everything that before we knew it 3 hours passed and it was closing time. We made a mad dash to get to the giraffes but unwittingly walked straight to the exit (I swear that was orchestrated by the keepers!) It’s difficult to see everything in one evening so I would recommend prioritising which animals you most want to see then planning around that. It was an awesome way to kick off the weekend.

Saturday was all about Holi Festival. The Holi Festival is one of the most famous celebrations in the northern parts of India where people celebrate the victory of good over bad and the beginning of the spring… At least that’s what the internet tells me.

Naturally, some festival organisers thought it’d be a great idea to bring it to Europe and get 30,000 people to celebrate by covering each other in brightly coloured Gulal powder at a huge party in the Olympic Park. See following for reference: 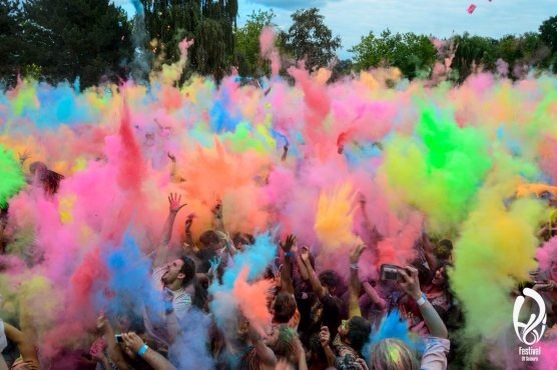 Every hour on the hour was a countdown to throw your powder up in the air amidst a throng of other revellers. As amazing and unique as this was, the first countdown freaked me out a bit. In the space of a few seconds when that powder hits the air, a thick, cloudy fog descends and everyone around you disappears behind it. I was concentrating on not getting powder in my eyes / up my nose / down my throat (which inevitably happened) but once the air cleared you realised it wasn’t that bad, the powder was harmless really!

The atmosphere was incredibly chilled – just having DJs on the main stage meant nobody was pushing to get to the front or getting squashed in and having their drinks trampled on etc. You were free to sit, eat, drink and dance wherever & whenever you felt like it.

This is the second year Holi has come to London and early bird tickets were only £25 for the day. There were lots of long queues (come on, this is England!) and we were incredibly lucky with the weather as I know that Sunday was a washout sadly. I’ll definitely try to go next year!

Here are some pics from the day: 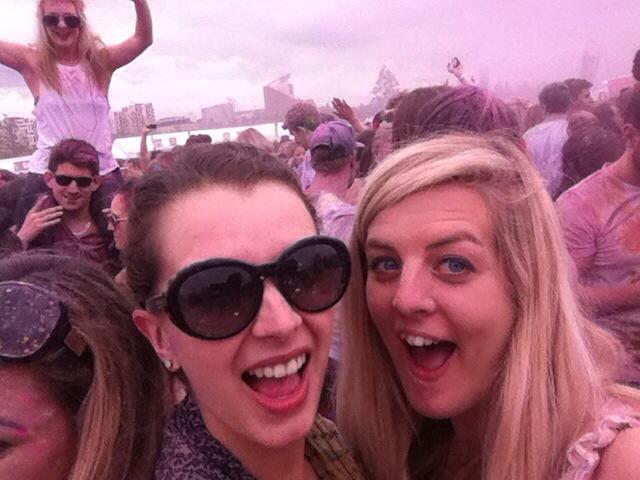 After all that excitement Sunday was a welcome relief, though I’m still aching from a lengthy bike ride around Victoria Park! Hope you all had good times of your own.

← The joy of missing out (JOMO).
A very vegan dinner party →